The Annihilation of Erfurt - New Shirts 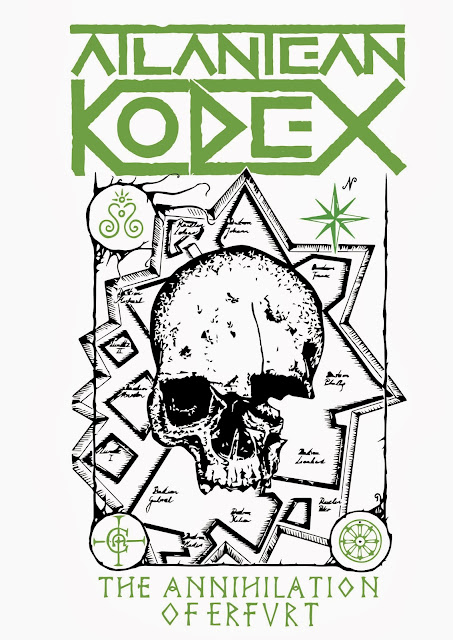 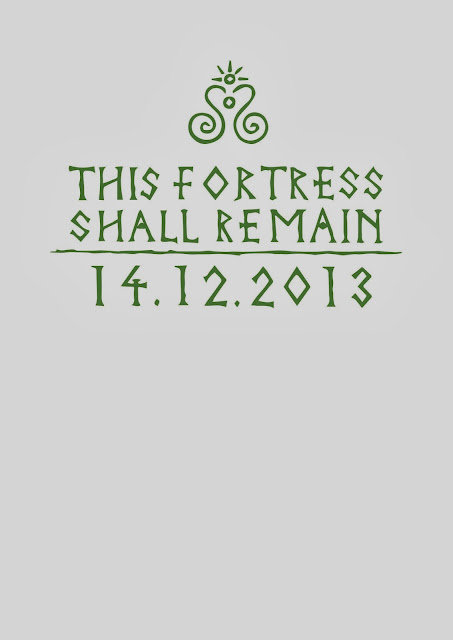 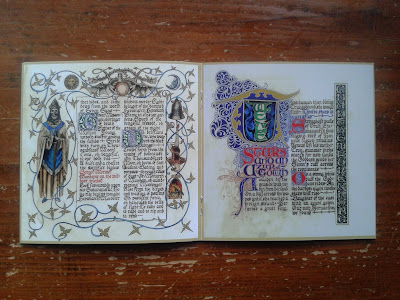 The CDs have finally arrived from the pressing plant. The 24-page booklet with the hand-painted artwork looks absolutely stunning. You can now order your copy directly from Cruz del Sur:

Vinyls will be ready by the end of next week. We'll let you know as soon as we have received them.


Here's what the press says about "The White Goddess":

MUSIKREVIEWS.de (D): 15/15
"'The White Goddess' is only sheer perfection. It is simply THE point of reference when it come to Epic Metal. Anything but the top grade would be a sacrilege."

METAL MIRROR (D): 10/10
"The White Goddess is simply a total work of art. An album, you've been subconsciously waiting for as a metal fan for years. The iron aura of early Manowar meets the grandeur of Bathory and the unique elegy of While Heaven Wept. The result is a piece of music, which will stand unrivaled for a long time to come."

METAL CRYPT (USA): 5+/5
"For depth of composition, feeling, and meaning; for integrity and a devotion to real metal above all things, Atlantean Kodex stands completely alone."


SPIRIT OF METAL (F):
"In 2013 Atlantean Kodex are the quintessence of traditional metal, they're more perfect in everything. Burn your collections of impure CDs in their honour. If you keep only one CD, it will be this one. Amen."

FORGOTTEN SCROLL (GRE):
"The Kodex are seriously taking a high -if not the highest- slot on the Epic Metal pantheon of today. Quorthon would be happy, he would smile from sky high listening to his sons." 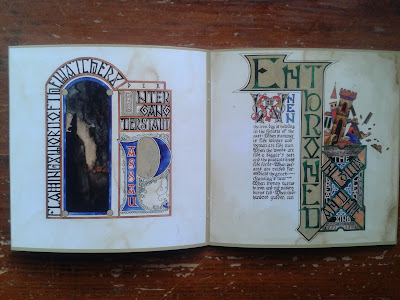 The first reviews are being published on the internet:

"I remember very well my mention about the 'Golden Bough' to be on the list of the most important Epic Metal albums of this decade. Well with the "White Goddess" album the band have managed to reach a HIGHER LEVEL […]

the Kodex are seriously taking a high -if not the highest- slot on the Epic Metal pantheon of today. Quorthon would be happy, he would smile from sky high listening to his sons."

"An epic elegy, a call to battle! […] I sucked up every note of it, I enjoyed every melody. Albums like this do not come often anymore ..."

"The production is great and atmospheric, the musicians are top notch, the lyrics are perhaps the best written the genre has seen in a while and it's very epic, perhaps too much. This is still the best Epic Metal album of 2013, I, without certain restraints, welcome the new reigning kings to their throne."

"Atlantean Kodex deliver with 'The White Goddess' something special. EPIC is the word! With album tracks mostly clocking in 10 minutes or more, it takes you on a musical journey. Progressive edges (Fates Warning) combined with Manowar/Bathory grandeur! This is an album for a long time to enjoy! RATING: 9 stars (out of maximum 10 stars)."
---  Pieter_V / Progressive X Grooves radio

The Annihilation of Bergen 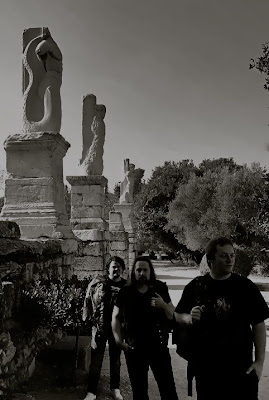 "I recall that the people went about with pale and worried faces, and whispered warnings and prophecies which no one dared consciously repeat or acknowledge to himself that he had heard. A sense of monstrous guilt was upon Norway, and out of the abysses between the stars swept chill currents that made men shiver in dark and lonely places."

ATLANTEAN KODEX
confirmed for
Beyond the Gates Festival
Bergen, Norway, 29.-31.8.2013

The Annihilation of Vienna


Bunch together a group of people deliberately chosen for strong religious feelings, and you have a practical guarantee of dark morbidities expressed in crime, perversion, and insanity.

The Annihilation of Erfurt 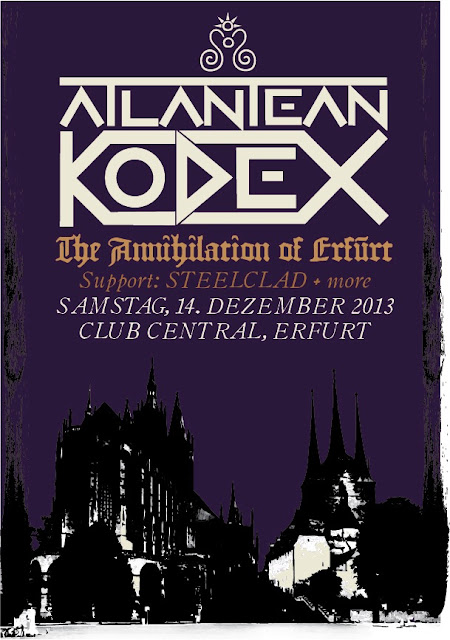 We have art in order not to die of the truth.

The Annihilation of Hamburg - Info & Shirt

Info regarding the tickets and the new shirt.
Presale starts on May 10th 2013

Limited Early-Bird-Ticket including an exclusive festival shirt of ATLANTEAN KODEX!
Ticket plus Shirt: 39 € (plus P&V)

The Annihilation of Rotterdam

"Come, come again, whoever you are, come!
Heathen, fire worshipper or idolatrous, come!
Come even if you broke your penitence a hundred times,
Ours is the portal of hope, come as you are."

The Annihilation of Westphalia

The Annihilation of Hamburg


It is necessary to have watchers at hand who will bear witness to the values of Tradition in ever more uncompromising and firm ways, as the anti-traditional forces grow in strength. Let people of our time talk about our songs with condescension as if they were anachronistic and anti-historical; we know that this is an alibi for their defeat. Let us leave modern men to their "truths" and let us only be concerned about one thing: to keep playing amid a world of ruins:


As the radiant wheel of the sun is growing and father winter leaves Europa behind, the time has come to descend from the Mountain Du-Ku for the second time. In the name of Enki, Sankt Blasius, Sankt Cäcilia and the Seven Gods who decree, we are glad to announce the release date for our second album, titled „THE WHITE GODDESS – A Grammar of Poetic Myth“.

Regarding the amazing job Enrico has done for our first album „The Golden Bough“, it was a no-brainer to keep working together. So we‘re very happy to announce, that once again the album will be released through Cruz del Sur Music.
Furthermore, in order to make the album more easily available for buyers in the USA and Canada, we have decided to sign to 20 Buck Spin Records for the release in Northern America. Dave is an enthusiast for high quality metal off the beaten track and has been working in the past with bands such as Occultation, Pallbearer or Liturgy. We feel in safe hands and so should all fans buying the vinyl and CD version of „The White Goddess“ in the United States and Canada.
And last but not least we are honoured and pleased to announce that the vinyl version for Europe and the rest of the world will be handled by Germany‘s finest, VÁN Records. Since quality is a top priority for us, there was no other choice than Ván Records. Ván is simply doing the best vinyl editions currently available. We‘re quite positive that the vinyl version of „The White Goddess“ will blow your minds. We have something very spectacular up our sleeves.

The official album release party and show will take place on October 5th 2013 in Athens. ATLANTEAN KODEX will perform a full set including of course songs from the new album and all previous releases. We cannot wait to come back to our friends in Greece to celebrate this special event with a titanic spectacle of might. Tsipouro, re mounia!

Ok, in short, here‘s what matters:

1. Trumpets of Doggerland (There were Giants in the Earth in those Days)
2. Sol Invictus (With Faith and Fire)
3. Bilwis (Sorcery and Witchcraft in Eastern Bavaria)
4. Heresiarch (Thousandfaced Moon)
5. Twelve Stars and an Azure Gown (An Anthem for Europa)
6. Kodex Battalions (The Iron Horde)
7. Virgin : Mother : Crone (Media Vita in Morte sumus)
8. Der Untergang der Stadt Passau (Flaming Sword of the Watchers)
9. Enthroned in Clouds and Fire (The Great Cleansing)
10. White Goddess unveiled (Crown of the Sephiroth)


Conjured by the Fires of Girra
and the veils of Sunken Varloorni,


and by the Lights of SHAMMASH.
We have been called again, before you, at Keep it True, in visible shadow
In beholdable form, to this sacred circle, this Holy Communion of steel
May he of the name unspeakable, the number unknowable,
whom no man hath seen at any time,
whom no geometer measureth
whom no wizard hath ever called
grant his blessings for this spectacle of might.


Rise up, by ANU we summon thee!